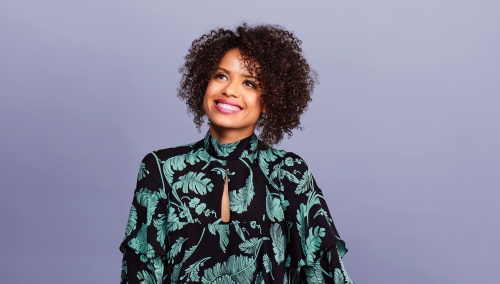 Gugu Mbatha-Raw is high on life. I can hear the smile in her voice when she picks up the phone—her joy bubbles over the line, and it’s wholly warranted.

The last seven days marked a frenzy of career highs for the 34-year-old Brit: the surprise Netflix release of her latest film, The Cloverfield Paradox, was the talk of the Super Bowl; she joined the cast of the Edward Norton-directed Motherless Brooklyn alongside Willem Dafoe and Bruce Willis; and she premiered her other Netflix movie, a heartbreaker of a romantic dramedy titled Irreplaceable You, in New York.

Oh, and last Friday, she became a member of the Most Excellent Order of the British Empire at Buckingham Palace (MBE). Casual. “We’ve been joking that I’ve been working on my damehood since I was 12,” she tells BAZAAR.com, laughing. “I’ve had one rung, three rungs down from a dame, so I’ve still got some more to go.”

It’s not difficult to imagine Mbatha-Raw walking in the footsteps of famous thespian dames like Judi Dench, Helen Mirren, and Harriet Walter. She, too, got her start on the stage before establishing herself through starring roles in Amma Asante’s Belle, Gina Prince-Bythewood’s Beyond the Lights, last year’s Disney mega-hit Beauty and the Beast, and a critically-acclaimed, Emmy-winning episode of Black Mirror.

But these triumphs merely set the stage for a year poised to shoot Mbatha-Raw to the highest rung of superstardom. Though critics panned the Julius Onah-directed Cloverfield Paradox, it’s worth a watch for Mbatha-Raw’s performance alone. She commands the screen, no easy feat alongside talents such as David Oyelowo, Daniel Brühl, and Elizabeth Debicki. And that’s merely the start of a string of highly-anticipated projects including the Ava DuVernay-directed A Wrinkle in Time, which is set to claim another box office victory for Mbatha-Raw when it hits theaters March 9.

Below, the actress opens up about her big week, venturing into STEM with her latest projects, and the fairytale Cloverfield moment that led to her casting in A Wrinkle in Time. [More at Source]

One Comment on "Feature: Gugu Mbatha-Raw for Harper Bazaar!"

Summerland
Gugu as Unknown
Release: 31 July 2020
During World War II, an Englishwoman "Gemma Arterton" opens her heart to an evacuee after initially resolving to be rid of him in this moving journey of womanhood, love and friendship.

Loki
Gugu as Unknown
Release: 2020
Follow the God of Mischief as he travels through time and becomes embroiled in major historical events.

Seacole
Gugu as Mary Seacole
Release: 2021
The biopic of Mary Seacole, a Scottish-Jamaican nurse and heroine during the Crimean War.